Along with so many other concerts and other public events, Inverness Choral Society’s Centenary Concert, scheduled for 9th May 2020, had to be cancelled. Our hope is that our performance of "The Creation"  will be rescheduled at some stage. 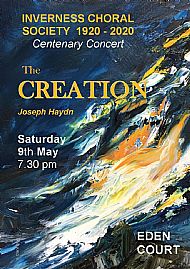 Celebrating our Centenary in 2020, Inverness Choral Society would have performed Haydn’s glorious oratorio The Creation. This was the first work of the newly-founded Society, back in 1920. Full of joyful music, this work is deservedly popular with audiences throughout the world. The oratorio was published in 1800, and retells the story of the days of the creation of the world, as described in the Book of Genesis. The striking poster (left) was specially designed by one of our altos, artist Clare Blois, depicting the drama of Creation.

Accompanied by the Inverness Choral Sinfonia and conducted by Gordon Tocher, our three soloists were to have been Colleen Nicoll, soprano, Jamie MacDougall, tenor and Jacob Bettinelli (all pictured below). 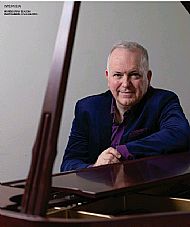 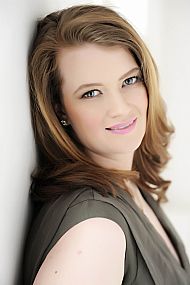 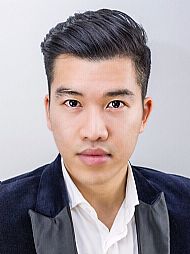 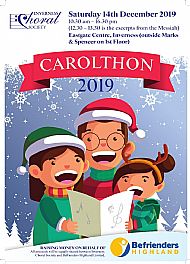 Our Carolthon this year took place on Saturday 14th December, 2019 in the Eastgate Centre (upstairs, adjacent to Chisholm Hunter jewellers). We had groups singing between 10.30 am to 4.30pm. The "lunchtime" slot between 12.30pm and 1.30pm had a larger choir and included some pieces from "Messiah". As usual we are partnered in fundraising with a local charity. This year it was Befrienders Highland, who work to improve the lives of people who are lonely and isolated and have experience of mental ill health, memory difficulties or dementia, and carers.

As announced on the Events page, we were able to present the charity with a cheque for £1800. Our thanks once again to everyone who gave so generously on the day. 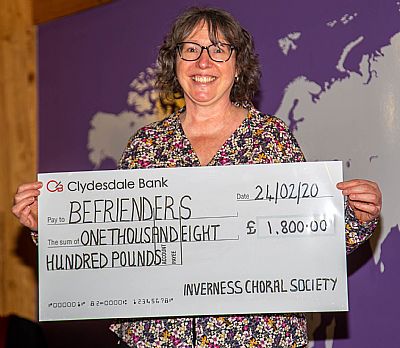 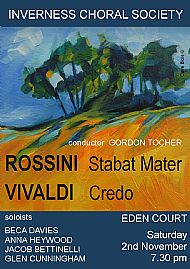 And so another concert has been and gone. We are  grateful once more to all who contributed to make it  such a success - our soloists, choir, orchestra and  our audience. We should give a special mention to  Fiona Joice who stepped in at short notice when one  of our original soloists was unable to be with us.

Thanks are due too to Jacob and Glen (soloists) for  the pictures from the night, included below. 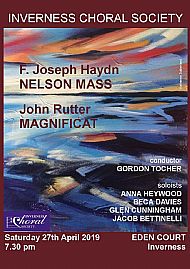 Thanks to everyone who contributed to the successful concert on Saturday 27th April 2019 - soloists, choir, orchestra, and of course audience. Our team of young soloists performed very well indeed, and soprano Anna Heywood was kept very busy with so much to do throughout the performance. Well done Anna. It was remarked how much local boy Glen Cunningham had matured with his singing since his school days as a member of Inverness Choral. There were also excellent performances from Beca Davies (mezzo soprano) and Jacob Bettinelli (bass). Here's to very successful musical careers for these talented young singers.

Inverness Choral Sinfonia played delightfully throughout. They have become a very accomplished orchestra.

And well done choir! The hard work at rehearsals was worth it. Special thanks of course to Gordon Tocher and Sheila Bruce who have led these rehearsals with great skill, patience and optimism. We could not do this without them. 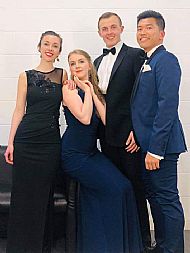 Our four young soloists at our recent performance of Haydn's Nelson Mass and Rutter's Magnificat. 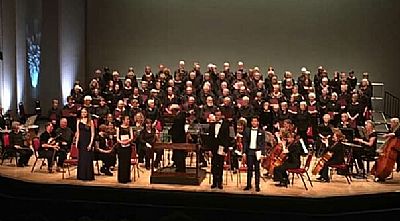 This photo of assembled choir, orchestra and soloists is courtesy of Anna Heywood, our soprano soloist.

Another successful and very enjoyable Coffee Morning was held in the Town House on Saturday 9th March 2019 from 10am to 12pm. A huge thank you to everyone who supported the Choral Society by coming along and spending money on the raffle, the bottle and CD stalls and buying the delicious home baking. We hope you had a lovely morning.

The biggest thanks, as ever, go to Sheila Bruce for her fabulous and seemingly effortless playing on the grand piano. Sheila's contribution makes our coffee mornings very special. The amount raised is currently £860 and rising (!). Every penny helps to fund future performances at Eden Court.

Don't forget to look at our Facebook page as well.

Inverness Choral Society was among the eight local choirs taking part in this year's 'Big Sing' at the Inverness Music Festival on Monday 4th March 2019 at 7pm.

e've raised £4,362 to be shared with partner charity, Inverness Foodstuff!

Presentation of our cheque for £2156 to Chair of Highland Foodstuff, Rev Fiona Smith and the charity's Treasurer, choral member Bob Glover. Carol Brown, the Choral Society's Carolthon organiser, is on the right of the picture which was taken at the practice on 25th February.

There was a good crowd listening and many generous donations made - our partner charity Inverness Foodstuff's collectors working hard with their collecting buckets all day. There are some photos of the first 'shift' below and in the photo galleries section, but do visit our Facebook page for more photos and video clips.

Every Tuesday and Thursday, and Saturday afternoons, year round, including Christmas, some of the 86 volunteers provide food, help, support and advice in the warm, cheery atmosphere in the Ness Bank Church Hall.

Local retailers donate unsold food which is turned into delicious meals by the volunteer cooks.

Even with discounted rental cost from the church and only one paid part-time employee, it still costs £25,000 per annum to run the project.

Treasurer Bob Glover said “We were delighted that this vital community resource was recognised in June when we were finalists in the Scottish Charity Awards 2018. This national recognition was a tremendous boost for our hardworking and committed volunteers. We’re delighted to be chosen as the charity partner for the Choral Society’s annual Carolthon and would be very grateful for every penny raised”.

Around 30 members of the Society accepted the University's invitation to sing carols between 10.45 and 11.30 am in the wonderful atrium entrance space which proved to have a rewarding acoustic. The 'audience' were very appreciative and the event was most enjoyable.

If you were in the audience for our performance of Karl Jenkins' The Armed Man' and other works on Saturday 17 November 2018, we hope you found it as memorable and moving as we in the choir did. (The photo on the left was taken during the afternoon's rehearsal, with more photos in the photo galleries section.)

We all thought our soloist Lilly Papaioannou and the Instrumentalists were amazing. In the first half of the evening's concert, Lilly charmed the audience with her singing of Benjamin Britten's: Tell me the Truth about Love and Funeral Blues. In a change of evening dress to suit the mood, she returned to sing a selection of folk songs from around the UK and delighted the audience by demonstrating the lighter side of her voice and character ahead of the serious, more sombre tone of 'The Armed Man', when she joined the choir by wearing black, adorned with a red poppy.

The two trumpeters, Mark James and Ian Shires played faultlessly and added such colour and meaning to 'The Armed Man', while Rona Porter's plaintive, soaring cello playing brought a lump to the throat in Jenkins' 'Benedictus'. Clair Munro and Beth Mackenzie were excellent on the varied percussion instruments used throughout the work, while Robin Versteeg (organ) and our own Sheila Bruce (piano) provided the musical underpinning of all the accompanied sections.

It was beautiful to hear the 'Call to Prayer' being sung, live, by a member of Inverness Mosque, and many in the audience commented on how memorable and moving it was to see the accompanying film behind the choir, which added to the powerful peace message of 'The Armed Man'.

This concert was another triumph for our Conductor, Gordon Tocher, who retained his customary calm throughout and steered us through the varied and demanding works.

Our next concert at Eden Court Theatre is Joseph Haydn's Nelson Mass and John Rutter's Magnificat on Saturday 27th April 2019.

Thank you to everyone who supported us by coming, buying raffle tickets, having a go at the bottle stall or buying some home baking. As ever, thanks are also due to Sheila Bruce who played the piano so splendidly throughout the morning, enhancing everyone's enjoyment of the event. A provisional total of around £750 was raised to help fund future performances at Eden Court Theatre.

And even further back:

The rehearsal on Monday 8th October 2018 was made memorable by the presence of our Honorary Patron, Pat MacMahon, better known throughout Scotland as an inspirational singing teacher and voice coach. Pat's career as a soprano soloist is also legendary. She regularly imparts some of her wisdom to the Society and those of us present benefited hugely from her sparkling, energetic and inspirational approach to singing 'The Armed Man'. "The energy comes from the words", she emphasised, encouraging members to imagine themselves facing the enemy in conflicts such as Culloden - the fear, the adrenalin, the faith needed to face the unknown. Our Chairman, Angus, spoke for us all when he joined conductor Gordon in thanking Pat for her generous tuition. Now we must practise our diction and boost our energy levels to convey all the emotions that this dramatic and moving work demands!

We had a busy day at the annual Carolthon on 16th December and hope all the shoppers enjoyed the lovely selection of music. Thanks to the team from our partner charity Alzheimer Scotland who were busy with the collecting buckets.

Congratulations all round and a huge thank you to everyone who donated. We raised £5,316, and recently presented Alzheimer Scotland with a cheque for £2,658.

Our Carolthon organisers, Mandy Thomas  and Carol Brown presentied our cheque to Elma MacKay of Alzheimer Scotland. Once again, a huge thank you to everyone who contributed to raising this amazing amount (half of the total achieved, the Society's funds benefiting from the other half).